After a few years of uncertainty, I decided to give Yankee Candle another shot. I wasn’t getting much throw out of the large jar candles, wax tarts, or votives that I was buying, so I pulled back and resisted their products. The company addressed these concerns in a Facebook Live video last year, and had unsatisfied customers contact a designated “We Listen” e-mail about hard-to-smell products. Yankee Candle has since released new scents, as well as entirely changing the look of their brand. I was due to see how the company responded to customer feedback, and thus, my semi-annual sale order was placed.

I ordered six large jars for $60 along with free shipping. I picked three fragrances in the classic large jar, and three in large two-wick tumblers. At least three of the scents are new. It will take some time to compare and contrast these fragrances, but for now, my initial thoughts are overwhelmingly positive. They seem like strong scented candles, and my expectations are not as low as they were a year ago.

Ocean Star – Better than I expected! I could see this being a very refreshing, unisex body care scent. Out of all the aquatic-type scents available, I’m glad I chose this one.

Pumpkin Buttercream – True to its title, but deepened with a lovely clove note. I think I may have to do a “pumpkin cake showdown” with other candles that are similarly themed.

French Countryside – Not as floral as I expected, but more like a soft spring and summer perfume. I’m really loving this candle, but I’m a seasonal burner… I may wait all the way until next spring to light it. Peeps – This smells like a delicious vanilla and marshmallow cupcake to me. I was expecting it to be a little more… candy-ish? I’ve never sniffed the Marshmallow Chicks Yankee candle with yellow wax, so I can’t compare the two.

Stars & Stripes – Really, this candle makes me think of a craft store, but during spring and summer months. To be honest, I bought it for the label – I really wanted a festive 4th of July candle.

Island Waterfall – The scent reminds me of a cleaning product, but in a good way. I think this would be a great neutral fragrance to burn around a lot of company. 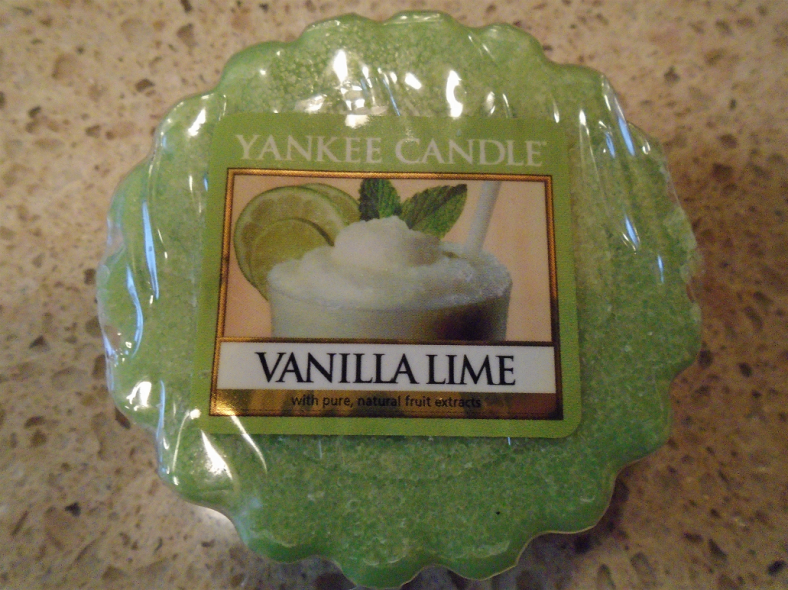 …and I only bought a single wax tart. I kept putting a Vanilla Lime large jar candle in my cart, but decided I wanted to test it with a tart first. I know this one isn’t new, but it’s new to me! Oddly enough, on cold sniff, I feel like I’m getting mint from this fragrance.